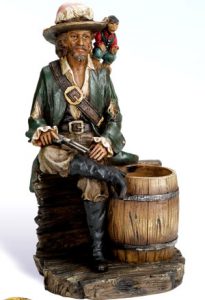 Ahoy ya pirate scum!! Anyone interested in a…., little quest? I happen to know of a treasure! And for a few pieces of eight and a tankard of ale, I just might tell you it’s tale!

What?
A narrative campaign for Freebooter’s Fate! Will you take part in the legend of Captain Rackham and find the gold?

How?
Assemble your crew! We will provide some narrative scenario’s for you to play in search of that legendary treasure.

Who?
Every Golden Goblin member with a Freebooter Crew!

When?
Starting February 16th until the 6th of July 2017. Every first and third Thursday of the month are play nights (occasional exceptions may occur depending on number of weeks that month).

Where?
Our Gobbo lair offcourse!! What were you thinking?

The Rules
Arrr ya pirate scum! Don’t you try cheating me. If ya coin ain’t good, may Davy Jones have yer soul!