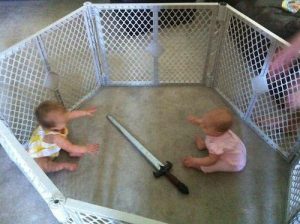 The 2016 Ravening Hordes Army Building challenge is almost coming to an end. Time for a little round up and some more info for our Arena Of Death!

To broccoli or not to broccoli
The end is drawing near. December 22nd is only little over a month away. The last weeks we saw a lot of painting going on, people frantically trying to get those models painted. While some have allready painted their army and are working on the other achievements some haven’t even gotten all of their models yet.
The community out of the box achievement has given us some small digestions as army themed candy was being brought forth. We enjoyed a few games of Winterheim (Oldhammer meets Frostgrave) and we had a blast shooting real arrows at fake beasts. As winter dawns upon the lands, we warm our hearts by the heat of the painttable lights and get our blood pumpin with adrenaline as we enter our general in an arena of death.

The concept of the Arena of Death is simple. There can be only one! Battle Royal!
The Rules: