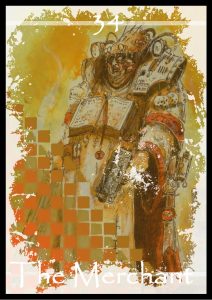 The thick smoke of Prometheum fires still burning in their lungs; the Kill Teams of Beta 42 are dragging themselves from one fight to the other. Licking their wounds on the way, checking their gear, and thinking of what others might have grasped. Wandering on how to get it for themselves. There are many way’s a man might get what he wants; you could buy it, trade for it, you might even get the chance to haggle or steal.. In the somber bleakness of war, you can fairly easy kill for it.
For the kill teams of Armageddon, the next confrontation is never far behind.

When?:
We will play this scenario on our club night 27/07

If you did however play the previous scenario, your kill team did not get the opportunity to properly resupply. Your Kill team did not get the chance to buy new equipment or recruit new members. You did get the time to rearrange your gear and reload and unjam your weapons. Kill team members who got “miss next game” as an injury result get to play as if they already suffered a flesh wound.