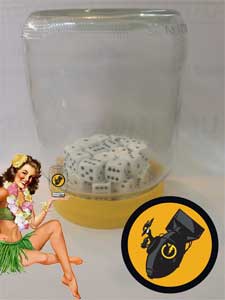 Ono “Wind of the wild” Rillietann of the “Deadly Jest”
A Harlequin Masque active in the promethium mines of Armageddon. Recently descended from Sainham craftworld, Ono has a lot to learn in his path of the harlequin. Though it looks like he is already taking good form in his role of “Wind of the wild”

During their latest play the troupe was confronted with disciples of the great devourer. Separated from his kinsmen, Ono was confronted with one of the massive Tyranid warriors hulking over him. The foul creature looked menacing at his prey and seemed to show a beast like smile, as it made ready to rip the jester apart. Jumping from pipeline to lever, clinching to the ceiling, flipping over barrels, Ono decided to bring the fight to the beast. Even he thought the wind would leave him tonight and that his part in the troupe was played, he managed to gut the creature not only sparing his own life, but giving him the honour of “Zarrian mor” the deadly storm.
To quote ono

Ruud, the owner of the model, actually just took a standard plastic harlequin. The paint job is far from finished, it now only has his base colours. The harlequins are fun to play, and not as hard as Guido would think. Facing those Tyranid warriors was a pain, those guy’s are though as nails.

I never expected a new recruit to fare so well; dice luck I guess 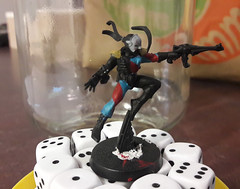 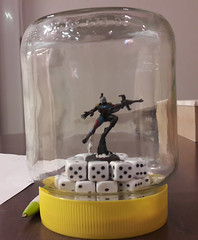